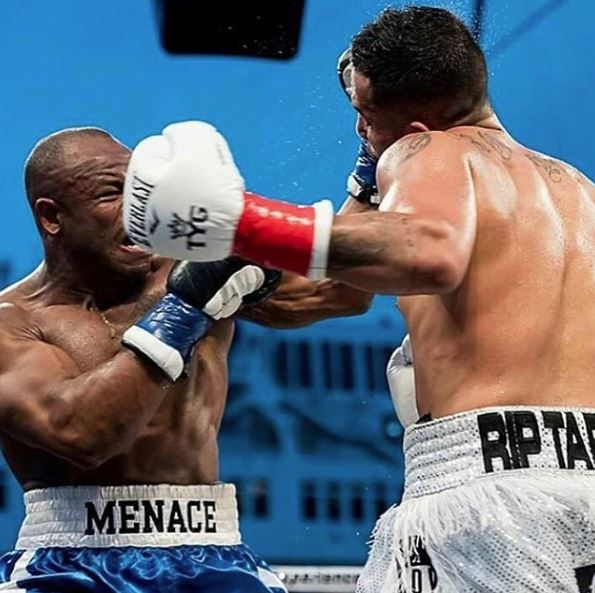 Mike “The Menace” Guy 10W 2L 1D Former Super Middleweight Title Sacramento CA Debuting his first professional fight 12-11-2009, Mike “The Menace” Guy was a power puncher sure to catch the eye of many who were fortunate enough to witness his special talent. Driven by his own will and determination to change the life he had always known.

Growing up in the Del Paso Heights area of Sacramento, fighting was something that was a part of Michael’s life. Fight to not become a product of his environment. There was always something different about Michael, his strength, his natural fighting abilities. After some rough patches, early on in his life, finding boxing was the beginning of his new-found direction and purpose. After coming off his first professional win, Michael focused solely on boxing.

From there he had another win before his 3rd pro fight, his premiere on ESPN Friday Night Fights, where he broke his hand with a hard punch to his opponent’s head, he continued the fight and finished it with a draw. Pure heart and mental strength can only explain his ability to fight to the finish on such an excruciating injury. Coming off a surgery Michael went back to the gym with the same motivation. He came back off injury with yet another win November 5th, 2011. In 2012 he captured two more wins. In April of 2013 Michael had his first lost in Alsterdorf, Hamburg Germany where he fought Undefeated champion Tyron Zeuge. Coming into this fight, Zeuge was expected to take this fight by 2nd round. Little did he know the power he was going to face in this big televised fight aimed to the fan favorite, Tyron Zeuge. Michael fought through, went the distance, and lost to a UD in favor of Zeuge. Anyone with boxing knowledge understands, this was far from a loss for Michael, it proved to the world that he could keep up with the best in the sport.

With disappointment in Zeuge camp, there was hardly any celebration at the end. Michael came with something to prove. Following his first loss, Michael won his next 3 fights, one being the Super Middleweight Champion and brought back a belt to Sacramento with great pride and support from so many. With one additional loss to another champion 6 and 0 Derevyanchenko. Again, Michael as the underdog, fought through the last round before a stoppage. This Showtime, Shobox depute was another great platform to show the world he was not giving up. Michael was here to stay.

Catching the attention of so many people, Michael has become a friend to all with a huge following of fans and friends. Michael has never truly been given the attention, credit, or opportunities that he deserves in my opinion. He is a humble man with a huge heart and a great father to three beautiful sons. His family means most to him and he wants to show his sons that anything you want to do in life is possible. He truly started from the bottom and built a name for himself through pure struggle. He now owns his own business Mike Guy Boxing and trains out of Urban Sprawl Fitness where he is known for his tough, no excuse approach. Michael invest his heart into each student and truly loves and enjoys his craft.

ARVE Error: loop is not a string. Only Strings should be passed to the shortcode function